Members are advised that our recent attempts to resolve the impasse in relation to the Enterprise Agreement negotiations has led to a dead end.  As a result, member meetings will continue. We did think it time for us to outline our two major claims, so members have a better understanding of the situation.

The current wage structure is broken.  Investigations earlier this year identified innumerable errors that could potentially result in large sums of money being returned to members.   It appears that in 2014, Qantas erased records of service points held by LAMEs meaning that promotions that should have been awarded have been overlooked by up to five years.  Additionally, Qantas had been continually advising us that there were no vacancies in many of the higher levels when verification of records revealed that the levels were not full and entitled advancements were unlawfully withheld.  Correction is a complicated process because the dates where vacancies arose are at this stage unknown. The parties are working through the mess and most likely will be for the best part of 2019.

The ALAEA claim is for a new simple system.  Rather than 17 levels with vacancy control from levels 12-17 plus EASA/380/Customer payments on top, we prefer just 5 levels with no vacancy control or extras payments.  A LAME progresses one level every five years and will reach level 5 after 20 years.  This way everyone can progress without restriction based on experience. The proposal also greatly benefits the airline as they can train as much as they like without paying additional licence payments. It gives them greater flexibility on Qantas aircraft and a more competitive platform to win revenue raising customer work.

The company say that the system would be too expensive because without vacancy control everyone could be at the top level.  What they are ignoring is that this could only happen if they don’t replace any LAME for 20 years. The company are more likely to have a spread of LAMEs across all age groups and all levels within the structure. The biggest saving for the company comes when you compare the current system with our proposal.  Today when a LAME in a quota restricted level retires, they create a vacancy.  That vacancy fills from the level below creating a vacancy in that level and so on all the way down the system.  One retirement today could lead to five other LAMEs receiving a pay increase.  That will not happen under the proposed system because there is no vacancy control.  The ALAEA provided detailed costings of our structure to management factoring in the ageing demographics and future workplace needs.  It shows that the total wages bill for Qantas will reduce over time under our proposal.

Qantas continue to say that our structure is too expensive but cannot substantiate this with facts or figures.  If Qantas agree to our new structure, the ALAEA will reduce our ongoing wage claim (which is separate) to 3% pa in line with what Qantas say is their wages policy. An example of how you translate, and the wage levels of our proposed structure are shown as an appendix to this notice.

In 2007 I remember a conversation with then Engineering manager Murray Harris.  He suggested that Qantas keep reducing LAME numbers until the system could not cope.  When the system broke down through understaffing, you simply add a small number extra and that would set the minimum LAME numbers to run the airline.  The concept was quashed by Geoff Dixon and certainly would have reduced the safety of those travelling.  By slashing numbers to all time lows in 2014 and not replacing any retiring LAME since then, they are implementing the exact same model by default.

It’s always easier for managers to maintain their budgets by not replacing retiring staff.  In doing so extra stress is placed on those who remain.   Members report that the current situation is dire with aircraft cabins in their worst ever state as labour has been shifted from non-essential work to simply only undertaking the mandatory tasks. Lack of staff has caused MOU levels to be reduced and now the required work is larger than available manpower.  International on time departures are at their worst ever levels and 20% lower than when the Qantas fleet was grounded during Industrial Action in 2011.  Aircraft are carrying more defects than ever before and reported mistakes are becoming far too frequent.

LAMEs today should not be bending the rules to provide temporary fixes for a problem we did not create.  It is only when Qantas acknowledge that they are understaffed that they will be inclined to find a solution.  We have had many recent reports of LAMEs in Supervisory positions leaving their posts to tow aircraft, attend defects and provide general band aid fixes.  In doing so important safety and oversight functions are left vacant, increasing the risk of errors and leaving others in unsafe situations.  Members should only undertake their normal tasks and not mask the problems by putting aircraft schedule before safety.  Every aircraft that does not make on time departure highlights inadequacy and takes us one step closer to a permanent solution.

The ALAEA proposes that the company lock in place the numbers of LAMEs they require in each port.  This would overcome the temptation for management to run the departments down and give ongoing job security for those LAMEs who remain.  Our claim is to lock in LAME numbers as outlined by management in 2014, the last time calculations were presented to us by them.  It would set the amount of Supervision required and maintain a proportional balance of Avionic and Mechanical LAMEs.

The company don’t appear to be overwhelmingly opposed to the claim but raised concerns over the 747 retirements and that the set numbers could be too high when the Queen of the Sky ends up in the desert. Next time we meet with Qantas we will propose that a reduction be allowed to cater for the 747 retirements.  This may be couched in terms such as –

When the final 747 is retired, Qantas may be permitted to reduce set LAME numbers by 50 across Australia by offering voluntary redundancies in ports as selected by Qantas.  All redundancies must be voluntary.  If insufficient numbers accept VR, VR shall continue to be offered until the required redundancy numbers are reached.

The above solution provides a commonsense approach, allows Qantas to forecast and fix future costs and will alleviate some of the stress felt by members today who are working under extreme pressure and need some relief and certainty.

The above claims set out the ALAEA position on these two key matters, our other four claims on wage increases, staff travel, post 96 penalty levels and Deputy also remain.  Engineering managers have indicated some common ground with us and we will continue to offer ongoing dialogue and discussion around our proposals to make Qantas a fairer and safer workplace for all.

The main stumbling block to achieving a fair outcome appears to be the IR and HR people.  They say no to everything and in my view appear not to possess the common sense to find solutions.  Ongoing conflict provides them with job security, and it is convenient for them to have a wage system littered with errors and complications.  In lieu of any counter offers the ALAEA will continue to press our claims and use all available means to reach a successful outcome. 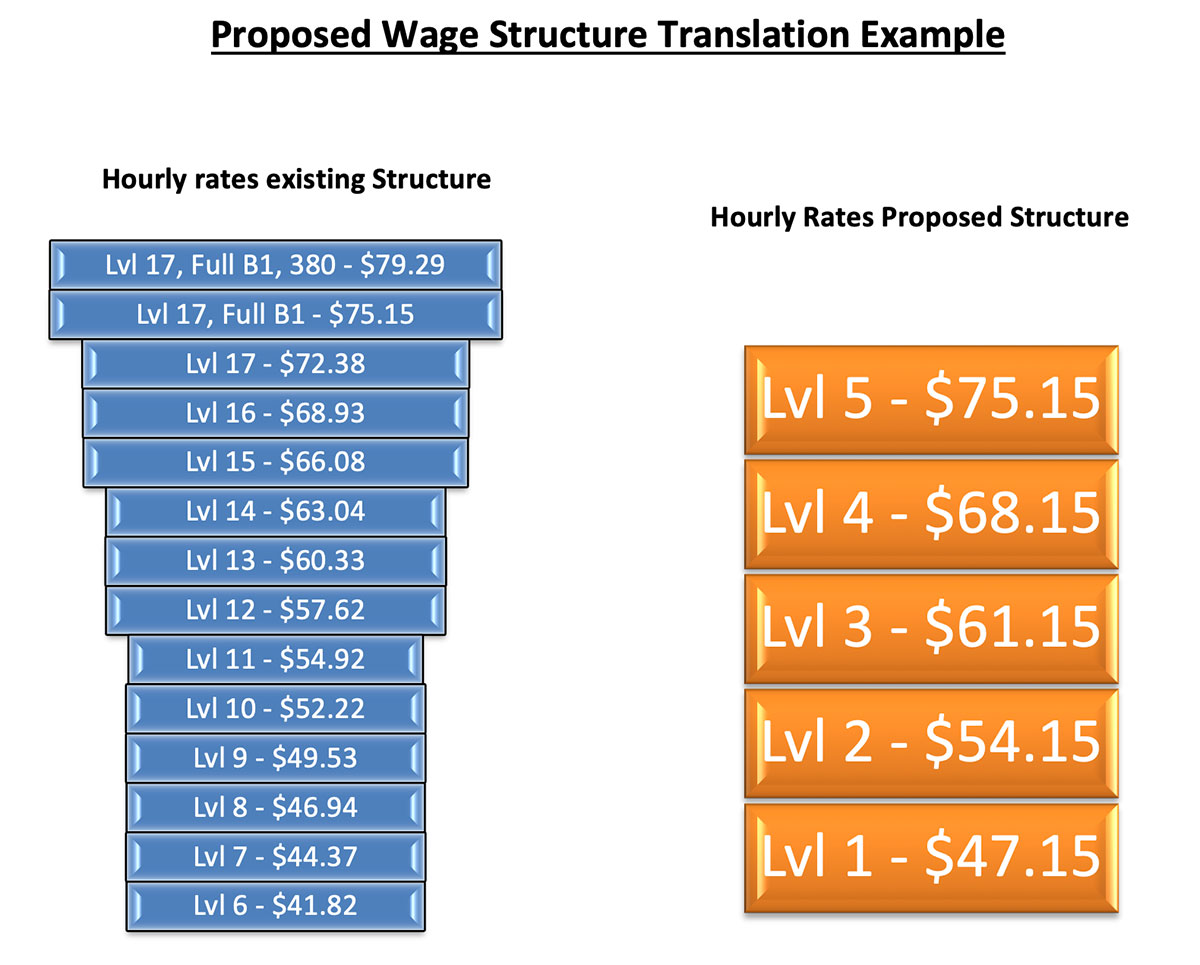 Under the proposed system every LAME moves across at the exact same wage rate that they receive today.  The main benefit for LAMEs comes by moving the barriers for progression for the many caught in quota restricted levels.  The company also win because retirees would not create vacancies for multiple LAMEs (increasing average LAME pay rates in the process) and training could be undertaken without adding cost.

Our proposed system would be far simpler to administer and fit within the companies desired 3% wages policy.