NOTICE 027/2018 – ALL QANTAS MEMBERS – OUTSOURCING OF SOME LINE CHECKS

Network has made some changes to the A330 flying pattern which will take effect from 12 November 2018 until mid March 2019.  The result of these temporary changes is that we’ll have additional natural ground time available in Sydney, Brisbane and Singapore for the A330 fleet.

The business intends to use this additional ground time to clear MEL/Hold items and other ad hoc maintenance programs. I understand that these programs are all in addition to current work demands.

Please let me know if you would like to discuss and arrangements with relevant management will be made.

We immediately wrote back to Qantas seeking further details about the network changes, mindful that Qantas are obligated to consult with the ALAEA as per the attached contracting out protocols.  We meet with the airline yesterday and they explained the further detail as follows:

We have sought more comprehensive details from the airline in relation to the network changes and upcoming planned mods.  The ALAEA has also flagged our intention to adhere strictly to the EA-underpinned contracting out protocols should any existing work be considered for a move to another location and that, as per the protocols, Australian products/services should be the prime consideration when planning future work. 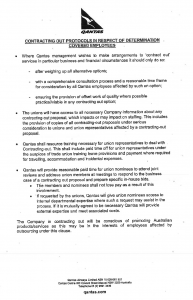