Members will have been following the events of the last two weeks with Qantas taking their mantra of bribes, threats and intimidation to a new level. There have been four years of low wage growth, including a period where all staff were expected to go 2 ½ years without a wage increase. That has now been surpassed by the latest stunt; withholding a small performance bonus until new substandard wage agreements are signed. All this as Executives receive huge bonuses immediately.

To add insult to the already aggrieved workforce, Qantas CEO Alan Joyce summed up his thoughts in a response to a Senior Qantas Pilot before the Captain was told he would not be flying his upcoming sectors.

“It’s very disturbing to read that you would seek to rationalise inappropriate behavior, like attempts to short change the company, by saying management had acted inappropriately in attaching conditions to a discretionary bonus. It’s bizarre.

Clearly, the sense of entitlement you mention is clouding some people’s perspective.” – Alan Joyce

Several ACTU meetings have since transpired and a day of action against this corporate bullying, to be attended by employees from all Qantas Group companies, will take place next Monday. This is a must attend meeting for all off-duty Qantas, Qantaslink and Jetstar members who live in Sydney. Other supportive members (current or retired) are also encouraged to attend. The Aviation unions are committed to putting on a large show and we need to be supported by anyone who wants the culture within Qantas to change. Details of mass meeting –

Workers to congregate at QCA from 12.30PM for a 12.45PM meeting commencement

ACTU Secretary to address meeting at 1300

Qantas Executives think that this anger over the bonus will dissipate after a few weeks; leaving them free to continue treating workers with contempt. We need to stop this behavior now. The mass meeting is our collective opportunity to join other unions in one show of force. A strong LAME presence at this meeting is a essential. 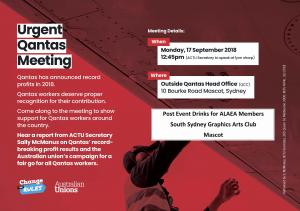