On Wednesday this week ALAEA Reps met with Qantas to discuss our concerns over the Deputy timekeeping system. We opened by stating that we wanted them to cease attempting to replace the current timekeeping system; unsurprisingly they rejected that request.  We then offered an alternative, as we have done previously, that would see us embrace their new system if certain protections were agreed in writing.  The three protections we sought are –

We know if these three terms are agreed, members will have a proper choice. You can either use the system to its maximum extent, waiving your own privacy rights in the process, or just use their workplace kiosks.  The company said they would get back to us with their response on the three points.  The company then wanted to know why we were so concerned about Deputy.  The conversation progressed as follows –

The ALAEA were concerned that Qantas are misleading members by advising them that GPS services are only activated when you log on and off for work. We asked Qantas why it was that a Sydney Deputy trainer who was presenting to a group of LAMEs in Melbourne had a message on his screen stating that he was 710kms from his home work location?  Qantas advised us that the trainer had elected to activate geolocation services and therefore it wasn’t a problem.  It was obvious to us that the trainer had activated GPS tracking, our concern was that LAMEs have been told something that is incorrect to try to lessen the concerns over the geolocation functionality.  Qantas said they would get back to us about this issue.

We objected to many of the permissions required by Deputy as part of their terms and conditions. Qantas stated that this was ok now as users (employees) no longer had to agree to those terms.  The ALAEA objected and explained that the contracts bind all users and hiding the terms from employees does not mean they are not subject to the terms.  Qantas said they would get back to us with a copy of the terms.

An article (attached) about Deputy was read where the company sell their product by claiming they can continue to gather and store information from your phone or iPad for up to 24 hours even when you are not connected to the internet. The data is integrated and collected from other apps and programs on your device and is transferred to Deputy when you reconnect.  From user agreements we have seen we understand the terms of Deputy do not limit the information then can obtain from your phone or iPad, and they can change the way they gather or farm that data without notifying you (a permission Qantas appear to have given them by signing a contract on your behalf).

We read from Qantas’ own business case document and sought further information about their projected cost savings of $350,000 per annum on overtime meals. One manager tried to explain to us how meal breaks on overtime were being exploited but seemed to err as he was describing something that was simply in compliance with the Enterprise Agreement.  Another manager then had to do a lot of back peddling, in the end they couldn’t explain how Deputy would save them money on overtime meal breaks and they advised that they would get back to us with a more detailed response.

Next we asked why they had identified Deputy as posing a risk to the payment of employee wages and what they had done to mitigate the risks. They assured us that all those risks had been eliminated.  We then asked why a member of ours had been docked 8 days wages the previous week; which had left him unable to pay his mortgage.  They said they would get back to us with a more detailed response.

We also discussed other risks their own document said could be introduced including fatigue and manpower shortages. They couldn’t really answer those questions either.  They did impress on us the added safety Deputy would provide in emergency situations including fire evacuations. Apparently the Fire Warden could simply look up on his iPad which staff were rostered at work at the time of the evacuation then count heads to ensure all were accounted for.  They were unaware, however, that Fire Wardens were usually Foreman. We asked how the Fire Warden would know if all staff were safe if they elected not to use Deputy on their iPad?  They will get back to us with an answer about this also.

Members being told that they cannot apply for leave unless they apply through Deputy should continue to complete the standard leave forms, take a photo of the form for your records and hand the form to the normal person leave is normally submitted to (Planner, DMM, Ops manager).  If you encounter any further dirty tricks from managers refusing to accept applications unless you do it through Deputy, please email Glynn Sowter (Glynn@alaea.asn.au) with the circumstances of the refusal and the ALAEA will follow this up from our end.

Until further notice, members should not use Deputy until this matter is resolved. 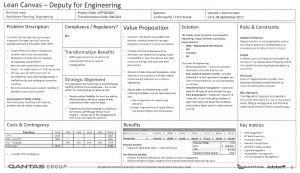 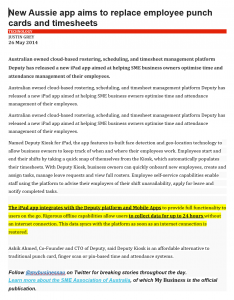